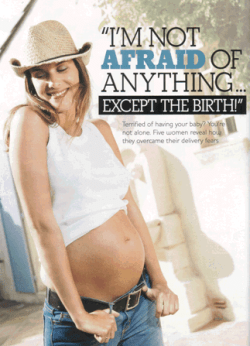 This true to life Hypnobirthing story of a “real” woman’s experience of birth, featured in the Cosmopolitan Pregnancy Magazine. Birth story came from a mum who had learned Hypnobirthing techniques for calm birth.

Below is her story as published In Cosmo Pregnancy Issue 097

“MY BIRTHING experience was easy, positive, drug and fear-free”

“I TOOK A COURSE IN HYPNOBIRTHING”

“I had a wonderful pregnancy, but in the back of my mind was always the thought that this was all too easy, things were going too well, and the birth was going to be a nightmare. So after a friend told me about hypnobirthing, I decided to attend some classes at the Sydney Wellbeing Centre

Hypnobirthing taught me how my body works, relaxation and breathing techniques. How to release negative emotions and thoughts and how to utilise my mind-body connection. When I told people I was taking the classes, they told me that it was a gimmick, but I believed in it, and I’ve never looked back.

As it turns out, my labour progressed quickly. I used techniques I’d learnt in my classes – such as slow breathing and visualisation – and just three hours later we met our baby boy. My birthing experience was easy, positive and drug- and fear-free, plus those techniques now help me sleep and deal with pain a lot better than I used to.” Belinda, 29

My pregnancy was what most people would call a textbook pregnancy. I felt great and was glowing, ate well and put on a reasonable amount of weight. But something was always at the back of my mind that this was all too easy and the birth would be a nightmare.

So I decided to do something about it and attend hypnobirthing classes after a friend told me about it.

This was the best thing I could have done and best advice someone had given me in order to prepare myself for the birth.

I had always wanted a natural birth and knew my body would do what it was meant to do, but being prepared for it was crucial.

When I told people that I was going to do a hypnobirth course, they told me that it was a ‘gimmick’ and would not work and I would end up having a caesarean section like most women today.

I believed in Hypnobirthing and that was all that mattered and I have never looked back since.

My labour started at 2am on 18 July, 2006 when I woke with what I thought was period pain and the need to open my bowels. I had done this and then felt much better and tried to go back to sleep. But somehow I just couldn’t. I had no idea that I was in early stages of labour as I was not in pain, just had a strange feeling that I could not explain and felt a bit uncomfortable, that was all. I had been feeling a bit “off” for some time now as I was 41 weeks pregnant and not sure when the big day was coming as I also had early signs of labour from 38 weeks.

I decided to wake my husband and tell him I felt a bit sick and he reminded me to start practising my breathing techniques and said I was probably in labour and the baby was coming.

It was then that I realised I WAS in early stages of labour.

I felt my good hormones kick in and got excited and could not wait to meet our bundle of joy. This is what really helped me get through the experience of birthing.

So here I was pacing around the lounge room breathing and feeling pretty good about it all. I was trying to rest in between surges for as long as I could. My husband was checking the timing of the contractions so he could tell the hospital how long they were lasting and how far apart they were.

Before I knew it my husband suggested we phone the birth centre to let them know what was happening and they asked to speak to me of course. Midwife asked me if I was having contractions and how I was feeling.

Then the midwife told me that it was still very early stages of labour and I should stay home for a while before coming in. She said to try having a bath or shower and having something to eat. I tried having a shower but could not stand for too long, and all I wanted to do was go to the birth centre and get in the big bath.

We waited for a little while and again I was pacing around the lounge room and asking my husband to try gentle touch massage on my back, which really helped in between surges.

What felt like minutes only passing, (my husband later told me it was a few hours), I told him to phone the hospital and tell them we were coming in. Again the midwife asked to speak with me and tried to convince me to stay home as I was too calm and I did not seem like I was due to give birth for quite some time yet.

I insisted we go to hospital as I felt things had progressed very quickly.

I think it was from this point on that my mother’s instinct kicked in already… we arrived at the birth centre at 7.30am and met our midwife who gently guided me to our room. I immediately wanted to get in the bath but they said I had to wait until they checked how far dilated I was and check my blood pressure.

The midwife did not think I was very far dilated (before checking me) and did not want me to get in the bath too early and she thought it might slow things down. Once she checked me, she couldn’t believe it, I was already 6-7 cm dilated and told the other midwife and my husband to get the bath ready for me so I could get in.

I had my sister and husband there as support people and they were great. When I wanted to be touched in between surges, my husband would do gentle massage on my back and neck and my sister would pour water over my lower back which provided great relief. During the surges I just wanted to breathe and focus, I did not want to be touched.

I continued to practise my slow breathing, had my eyes closed the whole time and was visualising meeting my baby. I still had no intention of using any form of pain relief or drugs as I felt that I was so close and could manage on my own, even though there was some level of discomfort but not pain. I was also using a face washer soaked in cold water to suck on during surges and this helped a lot.

Things seemed to be progressing very well and before I knew it the midwife said I was almost at the stage where I could start to push my baby out.

My waters had not yet broken so the midwife needed to do this for me as she said she could see the sac still around the baby’s head. By this stage I must admit I was quite tired and began to wonder how much longer it would all take.

My husband and sister reminded me of how close I was and were very supportive and reassuring that I was doing well and this kept me going for a little longer.

Eventually (some two hours later) I was told that I could start pushing and this to me was the biggest relief. I felt like I was ‘holding on’ for what felt like many hours.

The pushing stage for me was the hardest but also the quickest.

It had only taken me one hour and then the head was out. The midwife told me to have a rest and get myself together again and relax before breathing the baby out. At this point I was so happy and excited and my husband and sister were also very excited and couldn’t believe the whole experience was so positive and almost so easy and straightforward.

I can’t explain the emotions and the way I felt at this point but I knew that I would do it all over again and not change a thing. I did have a few stitches as I had a second-degree tear but recovered really well. I was tender and very tired but was able to get up and shower within hours of the birth.

Hypnobirthing techniques not only helped me with the birth of our baby but also helped me sleep at night and deal with pain.

Hypnosis skills were of help in difficult or uncomfortable situations. I also managed stress a whole lot better than I used to.

I believe it also helped Liam get through the first 5 months of his life. He has quite severe Gastro-reflux and was very uncomfortable and had difficulty feeding and sleeping. He is on medication daily. But amongst all the tears and unsettledness he would (and still does) laugh a lot and smile.

He is now 5 ½ months old and has a calm nature and is able to sleep well now (both during the day and night). He is quite active and developing appropriately for his age. I was very hesitant to put Liam on medication at such a young age, especially after having a natural birth, but the change in his temperament has been dramatic and I needed to do what was best for him. I also truly believe my calmness and hynobirthing experience during my pregnancy helped me to cope with the birth and first few months of being a first time mum at home a whole lot better and has also helped Liam cope with the level of pain and discomfort he experienced.

Hypnobirthing is definitely something I will have with me for life. Thank you Katherine for this wonderful experience, it truly was life changing.
Regards,
Belinda, Phillip and Liam.