Is this claim too good to be true? 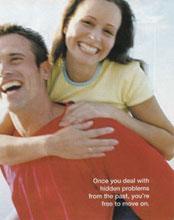 It doesn’t take a genius or a guru to figure out that physical ailments can be caused by problems that happen on an emotional level.

Sure, stubbing your toe more often than not means ‘watch where you’re going’ rather than a deep-seated fear of moving forward, but there are many instances where everyday difficulties reflect something in your subconscious.

Most of us don’t need a shrink to tell us that being kidnapped or held up in a robbery is likely to have a profoundly detrimental effect on our emotional state.

However, more subtle and seemingly insignificant events, usually occurring in childhood, can have an equally devastating result on your subconscious mind, triggering conditions such as addictions, panic attacks, migraines, fear of flying and eating disorders.

In today’s self-improvement society we’re encouraged to get in touch with our emotions and talk about such hurts.

Unfortunately, discussion can achieve only so much.

Simple, we’re looking in the wrong place. Most ailments and conditions are treated on a conscious level, which is why so many techniques fail.

When it comes to curing emotional problems there’s a notable absence of successful and permanent solutions, and that’s why it’s especially interesting to come across specialists who focus on precisely this area.

HEAL THYSELF
Private Subconscious-mind Healing, or PSH therapy, is a revolutionary therapy model, developed nearly 20 years ago by Australian subconscious mind practitioners Frank Wright, author of ‘Emotional Healing: PSH – A New Therapy For A New Millennium’ and Gregory Brice. They claim that it is effective, permanent, has a high success rate and is also scientifically proven.

It is revolutionary because, unlike many other therapies, PSH acknowledges and deals with the source of problems by allowing the client – and only the client – to privately and comfortably examine the feelings, originally triggered by an event, that are causing their present difficulties.

It is a gentle, non-invasive healing technique based on the knowledge that the subconscious or ‘inner’ mind, while capable of creating and storing past hurts, can also remove them.

Rather than trying to rationalise, discuss and talk out whatever the root of the emotional issue might be, the client, with the help of PSH, returns to the ‘scene of the crime’ in the subconscious mind where the problem originated.

HOW IT WORKS…
How does PSH help me to help myself? Before explaining the specifics it’s important to illustrate the differences between the conscious and the subconscious mind and how they function.

The conscious mind is the outer mind, logical, communicative and helpful in dealing with problems through rationalisation and discussion.

The subconscious mind is the intuitive and feeling part of mind. It lacks the same reasoning as the conscious mind, but it can cause profound reactions in your life.

For example, some reactions make perfect sense, such as experiencing fear when caught in a bad rip on a near-deserted beach.

However, some have no logic whatsoever, such as having a panic attack whenever you see a clown.

… AND WHY
The explanation may be that when emotion was originally formed, you were a toddler at a friend’s party and a huge, well-meaning, yet monstrous-looking clown picked you up and started carting you off. Hardly surprising that you felt very anxious.

PSH allows clients to effectively nail and cure their problems within three to five one-hour sessions.

People who have been seeing a therapist for years are often amazed by the speed and effectiveness of PSH, however the reason is logical and simple.

The hurt or feeling at the root of the problem took only seconds to manifest, therefore it makes sense that once it has been located it takes only a few seconds to release.

The initial session involves the therapist asking a few questions and clarifying whether the problems now are in fact caused by subconscious emotion.

During the first session the therapist will also tailor-make what you need to do to reach the subconscious level of mind. Together, you work it out and discover how to easily bring about positive changes.

The follow-up sessions consist of locating the ‘causative’ emotions and, most importantly, recognising the irrelevance of these emotions now at a subconscious mind level.

Some people find this takes longer to do than others – after all, for years they have been using their problem as coping mechanism on a subconscious level.

For instance, the only rest a CEO with a high-powered job may receive is when he or she has a migraine.

PSH, however, helps you recognise that these are preventing you from moving forward. Release occurs after locating the causative emotion.

Each release is as unique as the client and is achieved without angst, primal screams or floods of tears, as the subconscious mind is the ‘gentle’ mind.

Usually you will simply feel a sense of wellbeing and closure.

You will know within yourself if further work is necessary, many people ring after the second session to report that there’ll be no need for further treatment. People rarely feel the need to have further follow-up treatments with PSH therapists.

Perhaps the most important thing about PSH is that you’re responsible for curing yourself, the therapist is there to simply guide.

Nor is it necessary for the therapist to know what caused the emotion because there is no discussion involved. In this way PSH is indeed totally private.

It also restores your power by making you realise that the part of the mind responsible for setting up the problem or symptom to begin with also has the ability to heal it.

Once you deal with the repressed feelings causing the problem, you’re free to move on.